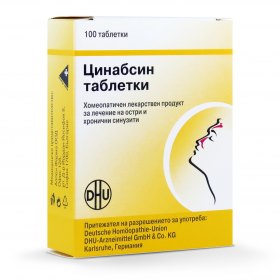 Cinnabsin has been used for more than 50 years to treat rhinitis and sinusitis. Its composition is chosen so that to help the nose to cope with an illness.

The main feature of Cinnabsin is its diverse action profile.

Cinnabsin not only safely recovers nasal breathing by removing swelling of nose mucous and paranasal sinuses, but also thins thick mucus, makes its expectoration easier, thereby normalizing natural mechanism of cleansing nasal mucosa and paranasal sinuses. Another Cinnabsin advantage is its ability to raise body defenses, which accelerates recovery and prevents transition of acute into chronic process. Cinnabsin is approved for use in children from 2 and adults.

Cinnabsin* due to its diverse action profile stands out of vasoconstrictor drops, which only restore nasal breathing, thereby causing vasoconstriction of blood-vessels and impairing the natural mechanism of nasal mucosa cleansing.